11.3. An Introduction to Classical Chart Patterns

A chart pattern can be defined as a distinct formation on the price chart of an underlying asset that generates a trading signal. Chartists use these patterns to forecast future price direction. The theory behind chart patterns is based on the assumption of technical analysis that history tends to repeats itself.

There are two types of technical chart patterns – reversal pattern and continuation pattern. A reversal pattern signals that an ongoing trend will change its direction upon the successful completion of the pattern, while a continuation pattern signals that a trend will resume its original direction once the pattern is complete. Technical chart patterns are formed on price charts of any timeframe, be they hourly, daily, or weekly. In this lesson, we will discuss some of the more frequently appearing chart patterns.

Both of these head and shoulders variants have similar chart features in that there are two “shoulders,” with a “head” in between, and a neckline that connects the price troughs. The patterns are confirmed when the neckline gets broken post the completion of the second shoulder.

A head and shoulders top forms after a bull run, and its completion signals a reversal in trend. The pattern is made up of three consecutive price peaks, with the middle peak, called the “head,” surrounded by two lower peaks (shoulders). The swing lows following each peak are connected to form the “neckline.”

For the formation of a head and shoulders top, it is important to establish the existence of a previous uptrend. Without a prior trend in place to reverse from, there cannot be a pattern. During an uptrend, prices first rally to form a new high. After plotting this peak, prices decline to complete the left shoulder.

From the trough of the left shoulder, prices again advance to exceed the previous high. This marks the head of the pattern. The subsequent fall takes price to the support zone that is holding the uptrend intact. The right shoulder is the final attempt by the bulls to keep the momentum going, the failure to do which, results in a change in trend from up to down.

The head and shoulders bottom is also often referred to as an Inverse Head and Shoulders. It forms after a down trend, and the completion of the pattern marks a reversal in trend. The pattern comprises of three successive price troughs, with the middle trough, called the “head,” being the deepest. The head is flanked by two higher price troughs that are termed as the left shoulder and the right shoulder. The price swing highs are connected to form a neckline resistance.

During a downtrend, prices decline to new lows that form the left shoulder. From there, a rebound ensues to a chart a reaction high. The subsequent dip exceeds the previous low to form the head of the pattern. After printing this bottom, the high of the following price advance forms the second neckline point. The bears make one final attempt to hammer prices to fresh lows, the failure to do which, results in the formation of the head and shoulders bottom.

In technical analysis, triangle patterns can be both trend reversal and trend continuation formations. They can be best described as horizontal trading ranges, where the forces of demand and supply are in equilibrium, until one side overpowers the other to move prices in their favour.

Triangle patterns can be classified in to three categories:

Flags and Pennants are commonly occurring continuation structures that depict a small price consolidation prior to the resumption of the original trend.

Double tops and double bottoms are frequently-occurring and reliable reversal patterns. A double top is a bearish reversal formation that signals a price rally is no longer sustainable, and that markets are primed for a change in direction. A double bottom is a bullish chart pattern that appears after a pronounced down trend and indicates that prices are more than likely to head higher.

As the name suggests, the double top pattern is composed of two consecutive price peaks that are roughly of equal height, with a distinct trough in between. Just like any other major reversal pattern, it is imperative that a preceding trend be in place to reverse from. In the case of the double top, a significant uptrend of several bars is a necessary pre-requisite. The first peak of the pattern marks the highest point of the current trend. Once the first peak is plotted, a price pull-back takes place that typically lasts for 10% to 20% of the prior up move. Bulls intervene at this point to absorb the selling pressure and take prices higher. But they fail to break through the first peak, which represents a significant resistance zone. While exact peaks are desirable, there is some latitude. Usually, a peak within a 3% distance of the first peak is considered valid.

The subsequent drop from the second peak should be accompanied by an expansion in volume. This serves as an affirmation of the fact that the forces of demand are weakening, and a move lower is imminent. The double top pattern is confirmed when prices break down below the support level that exists at the lowest point between the two peaks. The distance from the support break to either of the price peaks should be deducted from the support break area to arrive at a price target for the breakout move. This would imply that bigger the double top formation, the larger is the likely decline. 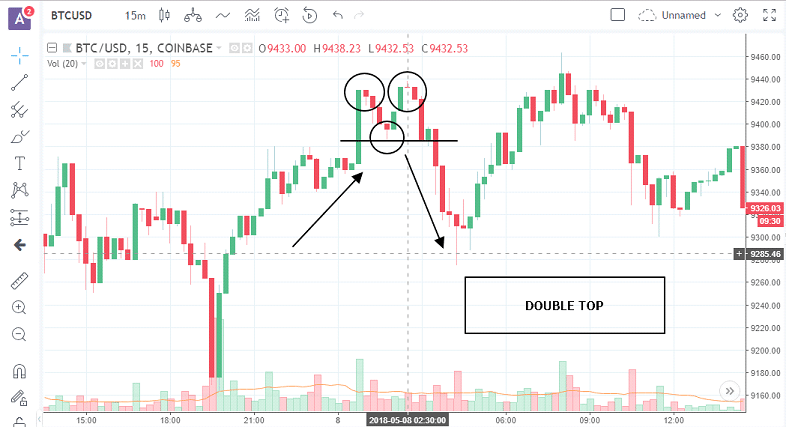 The double bottom pattern is made up of two successive price troughs that are roughly of equal depth, with a well-defined peak in between. As is the case with the double top formation, there must be an ongoing trend to reverse from. The double bottom requires that a significant downtrend of several bars be in place for the pattern to be deemed acceptable. The first trough represents the lowest point of the current trend, and is fairly normal in appearance. After the first trough has been printed, a minor price advance materializes that typically ranges from 10% to 20% of the last down move. Some bears see this as opportunity to load up on their shorts and enter to push prices lower. But this bearish volume quickly dries up and prices are unable to breach through the strong support zone created by the first trough. This should serve as a warning that a change in trend from down to up is in the offing. The double bottom pattern is finally confirmed once prices breakout above the highest point between the two troughs on greater than average volumes. The distance from the resistance break area to the low of the troughs can be added to the resistance break to estimate a price target for the ensuing up move. Traders should note that broken resistances often tend to turn to future support areas. There are times when following the completion of a double bottom pattern, prices temporarily retrace to near the resistance zone that marks the high between the two troughs. Such dips offer a second chance to traders who missed out on the original breakout to initiate fresh long positions. 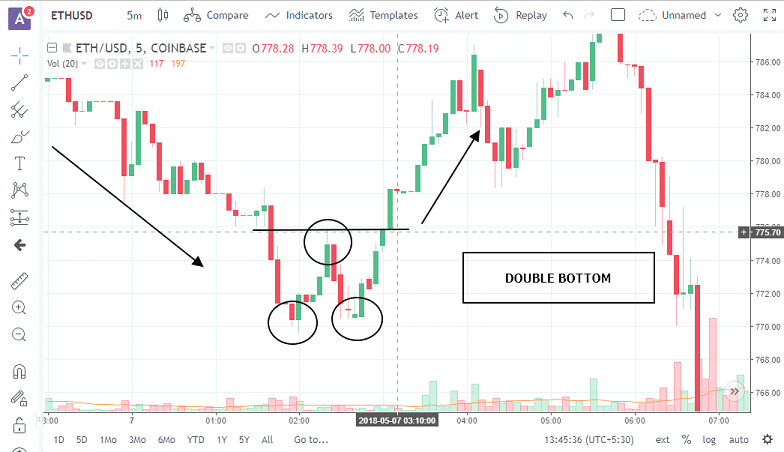 Looking to trade? Find our leading CFD brokers and great Forex brokers to choose from!