TradeStation was originally founded as Omega Research, Inc. in 1982 by two brothers, William (Bill) and Rafael (Ralph) Cruz. The brothers’ objective was to create an application in which traders that didn’t have a technical or computer programming background could test their own trading strategies. The result was the development of EasyLanguage, the company’s proprietary coding language for non-computer-programmers. In 1991, the company released the first version of the Tradestation Trading Platform, and in 1996 released OptionStation, an options trading analytics add-on application used for exploring complex options trading strategies. Both applications were cutting-edge. By 2005 TradeStation became a self-clearing equities and options firm. It has since then morphed into TradeStation Group, Inc and is the parent company of online securities and futures brokerage firms and trading technology companies. It’s headquarters is located in Plantation, Florida, and it operates offices in New York; Chicago; Richardson, Texas; London; Sydney; and Costa Rica.

From 1997-2011, TradeStation Group was listed on the Nasdaq as ticker symbol TRAD, but is no longer since being acquired by Monex Group, a Tokyo Stock Exchange listed parent company of one of Japan’s leading online securities brokerage firms. TradeStation is a member of the NYSE, FINRA, SIPC, and is regulated by the SEC, FCA and other regulatory agencies around the world. Its Customer funds are eligible for the SIPC investor protection scheme which offers up to $500,000 (cash up to $250,000) per account.

TradeStation offers its clients tradable assets across multiple classes including stocks, EFTs options, futures, commodities, and mutual funds. Commissions will vary depending on the asset and the volume of trading. TradeStation also offers after-hours trading. Below is a list of instruments available for trading at TradeStation:

TradeStation announced in mid-January 2019, its plans to enter the rapidly evolving cryptocurrency markets in 2019. It recently formed a subsidiary, TradeStation Crypto, Inc. which will be specifically geared towards providing an online brokerage service for cryptocurrency traders and investors.

TradeStation clients can open an individual, joint, IRA, or custodial account. Business entity accounts are also available. TradeStation also caters to large institutions. All accounts can also be specifically tailored for specific type of assets. For example, a trader can open an individual account to exclusively trade stocks. This requires a smaller initial deposit. Below is a list of details and features for Individual Trader Accounts.

There is a $500 minimum amount required to open an online trading account with TradeStation. There is a minimum balance of $25,000 to day trade in accordance with U.S. regulation. Clients are required to have cleared funds in their account prior to placing a trade.
Funding a TradeStation account can be accomplished via bank transfer or check. Bank transfer transactions take up to 3 business days. There is no minimum deposit for a bank transfer. There is a $25 charge for normal withdrawals and a $35 charge for withdrawals that require international wire transfers.
Opening an account with TradeStation is usually completed within 3-business days. Documents required are a valid ID (i.e. passport, driver’s license, or national ID), Social Security Number, and proof of address (i.e. bank statement, utility bill, or tax invoice dated within the last three months and issued to your name and address).

Where TradeStation sets itself apart from other brokerages is its Trading Platform. The platform is loaded with tools that provide traders with superior functionality, exceptional order and market position management, comprehensive chart analysis, and advanced technical and fundamental analysis. The platform includes a large number of pre-defined indicators, strategy components, and analysis tools.  The standout difference that distinguishes the TradeStation platform is its proprietary object-oriented Easy-Language programming component that allows traders to code their own custom indicators and trading strategies. Easy-Language is a very intuitive, “easy” to use programming language that was designed by traders, for traders, to use specifically for trading. With Easy-Language, programming indicators and trading strategies does not require extensive computer-programming language skills. Traders can quickly learn the basics and start developing their trading ideas into computerized trading algorithms. Traders can then use the advanced back-testing and walk-forward testing tools to test the viability of their trading ideas. Strategies can then be fully automated and run on a simulator to ensure that they work properly and generate profit before risking any capital.
TradeStation also provides its clients with the TradeStation TradingApp Store where traders can access hundreds of TradeStation-compatible products created by independent third-party developers. Users also have access to strategy trading ideas submitted by the TradeStation community in the Easy-Language Library. 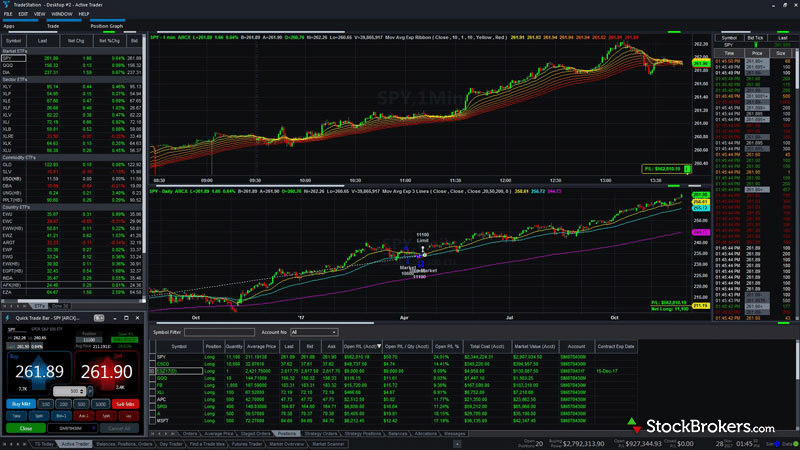 Below is a table summarizing the features of the TradeStation trading platforms:

TradeStation also provides a mobile application for clients that need to trade on the go, and a client-portal where clients can check quotes and place trades, see account balances, P&L and key performance metrics, funding, reporting, and other important information.

For further information on the:-