Interactive Brokers (IBKR) was originally founded as T.P. & Co. in 1977 by its Chairman and CEO Thomas Peterffy. It was later renamed Timber Hill Inc. in 1982. Over the next 40 years the company has lead the way in developing and implementing trading technology innovations including the use of fair value pricing sheets on an exchange trading floor, and an automated algorithmic trading system to automatically create and submit orders to a market. Interactive Brokers was formed in 1993 as an electronic broker-dealer in the US. In 2014, Interactive Brokers became the first online broker to offer direct access to IEX, a private forum for trading securities. Interactive Brokers has grown to become one of the premier securities firms with over $6 billion in equity capital, and over 939,000 trades per day in trading volume.

Interactive Brokers is publicly traded on the Nasdaq exchange under the IBKR ticker. It is headquartered in Greenwich USA, and operates offices in: Switzerland, Canada, Hong Kong, UK, Australia, Hungary, Russia, Japan, India, China and Estonia. It conducts broker/dealer business activities on over 120 market destinations worldwide to professional and institutional traders for a wide variety of electronically traded products. Its regulated by the SEC, FINRA, NYSE, FCA and other regulatory agencies around the world. Its Customer funds are protected up to $30 million, including up to $1 million for cash. In the U.S., the first $500,000 of protection is provided through the SIPC, and Lloyd’s of London provides a $29.5 million umbrella coverage. On a whole spectrum of measures they are considered one of the best online brokers.

Interactive Brokers offers its clients over one of the largest array of tradable assets of any brokerage across multiple classes including: forex, stocks, CFDs, indexes, futures, options, commodities, bonds, and mutual funds. Commissions will vary on assets depending on trade size. Below is a list of instruments available for trading at Interactive Brokers. For further information on the Best CFD Brokers or Best Forex Brokers, you can see our broker compare section. This also includes a review of the best brokers for beginner investors.

There’s a minimum balance of $2000 to open an account for and individual trader, and the minimum increases depending on the type of account that is opened. Funding deposits may be initiated by bank wire transfer, AHC, check, or online bill-payment. Deposits take 1 to 4 days to process and there are no fees for deposits. Although there may be fees charged by the originating institution.
Withdrawals are completed via AHC transfer or check. Accounts that do not participate in Interactive Brokers’ Secure Login System are limited in the amount of money that can be withdrawn. Account holders without a security device are limited to a maximum withdrawal of 50,000 USD per day and a maximum withdrawal of 100,000 USD in five business days. Typically, withdrawal requests submitted prior to a cut-off time will be sent the same day, but may take a few days. There is no charge for the first withdrawal (of any kind) in a calendar month; however, there is a fee for any subsequent withdrawal.

Interactive Brokers charges its client for holding trades beyond the close of a trading day into the next day. These costs vary depending on the instrument and the type of position (i.e. long or short) being held overnight, and in some cases may result in a credit instead of a charge. Inactivity fees take effect if accounts do not meet minimal monthly commission requirements. Funds are not held in segregated bank accounts, and Islamic accounts are not available. Opening an account is usually completed within 3-business days. Documents required are a valid ID (i.e. passport, driver’s license, or national ID), and proof of address (i.e. bank statement, utility bill, or mortgage statement). Interactive Brokers does not accept clients from the following countries: South Korea, Nigeria

Interactive Brokers offers its clients a state-of-the-art trading platform. The standalone Trader Workstation (TWS) is a proprietary trading platform that provides traders with powerful and sophisticated trading and technical analysis functions and tools. It provides intuitive quick and easy access to comprehensive trading, order management, charts, watchlists, portfolio and risk management tools all in a single, customizable workspace. The TWS platform is better suited for more advanced traders. Interactive Brokers also provides the WebTrader option. It is a web-based trading platform that offers similar functionality to the TWS platform with a simpler interface and works behind a firewall. Below is a table summarizing the features of the Trader Workstation (TWS) trading platform. For more information on the best trading platforms please review. 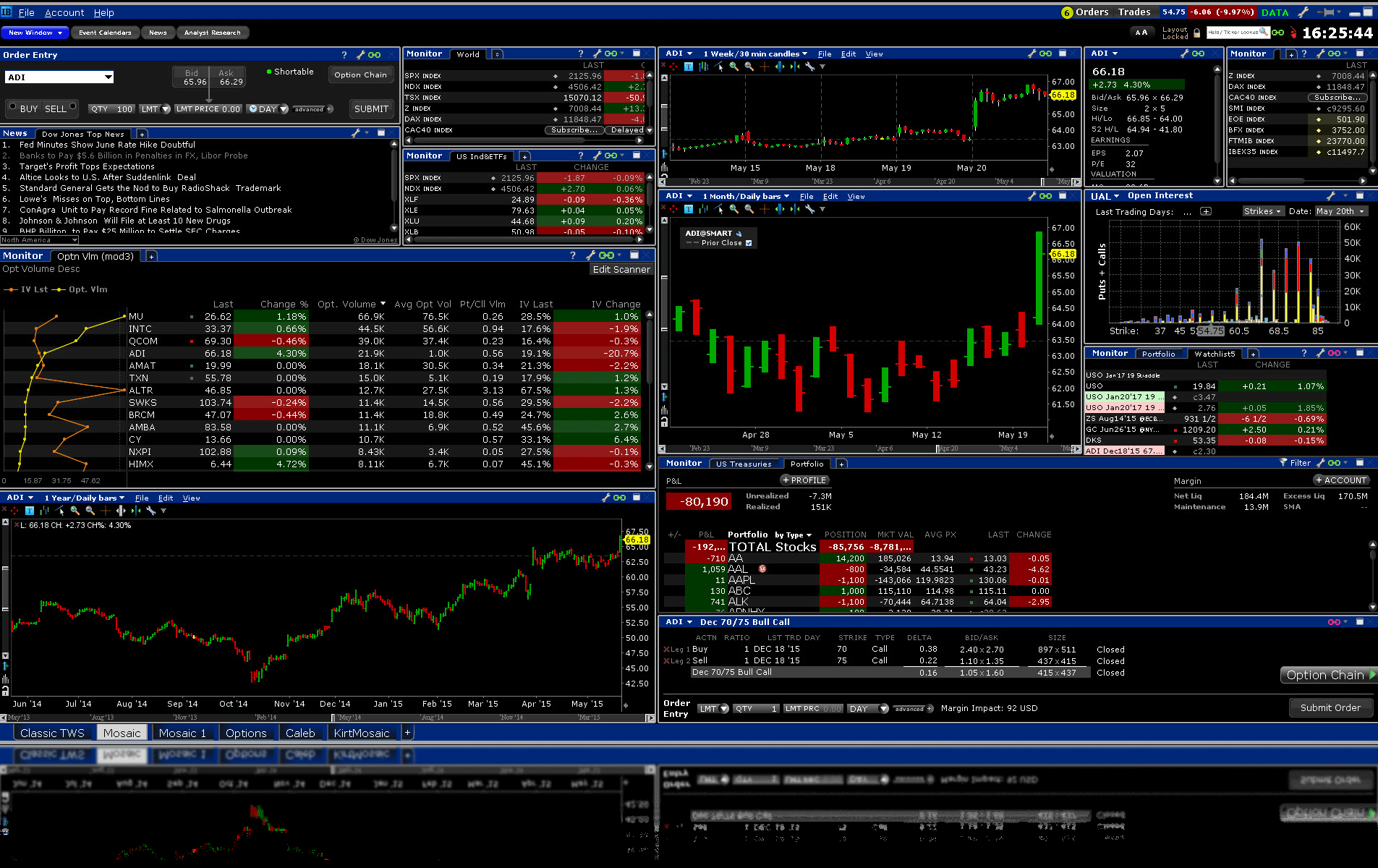 Interactive Brokers also provides a mobile application for clients that need to trade on the go, and a client-portal where clients can check quotes and place trades, see account balances, P&L and key performance metrics, funding, reporting, and other important information. For institutional clients that prefer to use their own trading platforms, or a third-party application, Interactive Brokers offers an easy-to-use Excel Application Programming Interface (API) which can be adapted to most applications.

The Traders’ Academy section of the website provides clients with very in-depth and robust educational material. It is well suited for financial professionals, investors, educators and students seeking a better understanding of the asset classes, markets, currencies, and the tools and functionality of the trading platforms provided by Interactive Brokers. Also provided are courses that use various methods of lessons, videos, quizzes, and notes to help TWS users improve their understanding of its tools and capabilities.

Interactive Brokers offers several support options including 24-hour phone and live chat which is available during market days, but shifts to foreign venues overnight. The website also includes a comprehensive knowledge database which clients can easily access. All agents speak English, and all call centers have multi-lingual agents in order to help customers worldwide.