Considered one of the leading retail forex and CFD brokerages, CMC Markets (formerly Currency Management Corporation) now serves over 60,000 clients worldwide through its 15 offices. It offers over 10,000 CFD instruments across major asset classes including forex, commodities, and securities markets. Originally founded by English banker Peter Cruddas in 1989, CMC Markets pioneered trading on the internet with its Market-Maker software platform in the late 1990s. As of 2016, CMC Markets listed on the London Stock Exchange under the ticker CMCX (LSE: CMCX), with an initial valuation of over $1 billion, making it one of the largest technology IPOs of 2016.

CMC Markets is regulated by several regulatory authorities in several countries. In the United Kingdom, they are regulated by the Financial Conduct Authority (FCA), in the US by the Commodities and Futures Trading Commission (CFTC), and by ASIC (Australian Securities and Investment Commission) in Australia. CMC Markets is also regulated and authorized to operate in Canada, France, Austria, Spain, Germany, Italy, Sweden, Singapore and New Zealand. It’s no surprise that CMC Markets claims one of the highest volumes of trading for forex and CFDs trading brokerages.

With over 10,000 instruments available for its clients to trade, CMC Markets offers one of the largest selections of tradable CFDs. The table below summarizes the approximate categories of tradable instruments with their estimated spreads and margins

CMC Markets is a global provider with 15 offices located throughout the world. As such, the account features available across all the regions in which the operate vary from country to country. Generally speaking, CMC Markets’ clients have the option to choose from two types of trading accounts, “Fixed Risk Account” or “Regular Account”. Fixed risk account holders have the advantage of guaranteed stops which they pay an extra premium for. There is no minimum deposit requirement at CMC Markets, but traders cannot commence trading until a deposit is made.

CMC Markets does charge a small commission charge for CFD trades. The commission varies depending on what country the trade originated from. A typical commission is 0.09% of the volume traded. As with most forex and CFD brokers, CMC Markets charges client for holding trades beyond the close of a trading day into the next day. Holding cost vary depending on the instrument and the type of position (i.e. long or short) being held overnight, and in some cases may result in a credit instead of a charge.

For a premium fee, CMC Markets offers a guaranteed stop-loss order (GSLO). It works the same way as a regular stop-loss order, except that it guarantees to exit a trade at the specified price regardless of market conditions. A monthly inactivity charge of £10 (or its equivalent in another currency) is assessed to accounts for which there are no open positions and there has been no other trading activity for a continuous period of two years. Additionally, CMC Markets charges a market data subscription fee for Australian and Hong Kong share CFDs on their trading platform. However, the fee is refunded if 2 or more trades are executed per month.

CMC Markets maintains segregated accounts for its retail clients. CMC Markets does charge fees for funding and withdraw transactions for accounts outside of the United Kingdom and vary depending on what country the transaction originated from. Accounts can be funded and withdraws made by debit or credit card, and bank transfers.

Opening an account with CMC Markets is usually completed within 1 to 3-days but requires that certified hard copies of documentation be mailed in before withdraws can be made on the account. Documents required are a valid ID (i.e. passport, driver’s license, or national ID), and proof of address (i.e. bank statement, mortgage statement, utility bill, or tax invoice dated within the last three months and issued to your name and address). CMC Markets’ services are not available to U.S. Residents.

One of CMC Markets’ most prolific advantages it claims to offer its traders is its Next Generation trading platform. Appropriately named “Next Generation,” the state-of-the-art platform was developed by CMC Markets’ in-house IT department and is the culmination of more than $100 million and 20 years of industry experience, and the latest innovations in online trading software. Below is a screen sot of the platform: 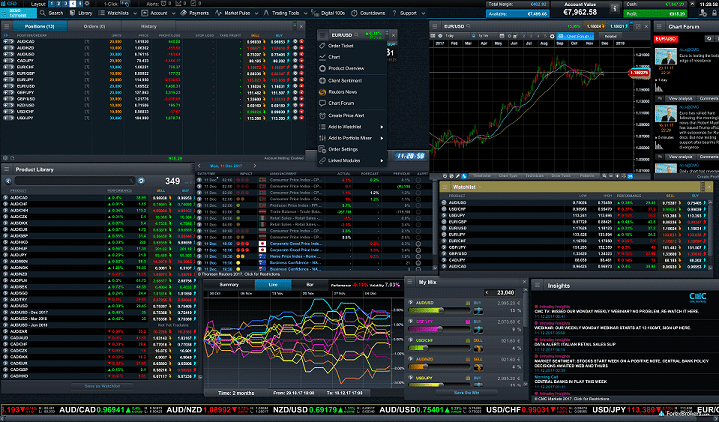 The Next Generation trading platform is a feature-rich platform,  including the following features:

The Next Generation trading platform does not allow for automated algorithmic driven trading strategies, or trading signals, and CMC Markets does not support Meta Trader 4 (MT4).

CMC Markets has a very comprehensive education section on its website that is dedicated to assisting its trader with learning about trading. The center includes tutorials, webinars, and instructional videos that range from basic to advanced concepts and trading techniques.

For further information on the:-