Choosabroker analysts review how the forex market is shaping up in 2020. With a shaky start to global equity markets, we review what forex opportunities may arise amid shaky macroeconomic conditions for retail and day trading. Asian domestic currencies look relatively weak while safe haven currencies may be positioning for explosive moves to the upside.

Global markets have gotten off to a shaky start in 2020. The United States and Chinese equity indices have recorded their worst start to a year since 2016 while UK equities haven’t seen such sharp January price declines since 2014.

Several economic developments unravelled in 2019 which had important implications on the forex market. Several central banks lowered interest rates which can serve to devalue their domestic currency. Debt levels reached record highs which can also harm the value of a currency.

Choosabroker have reviewed the developments at the start of this year and in 2019 to present an outlook for the forex market in 2020. We review the US Dollar, Asian currencies, safe haven forex opportunities, and Bitcoin. 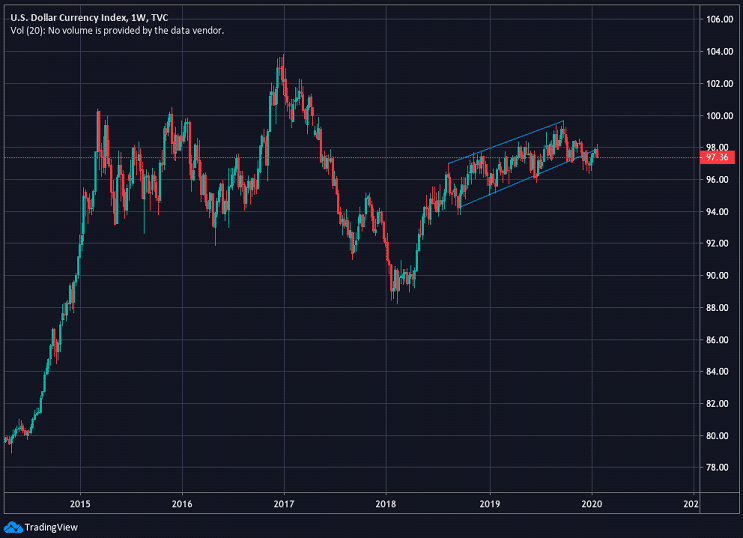 The US Dollar Currency Index (DXY) – an index which tracks the value of USD in a weighted index against the EUR, JPY, GBP, CAD, SEK, and CHF – has been trading in an uptrend since mid-2018. However, coming towards the latter end of 2019, the DXY began to form lower lows and lower highs on its weekly chart while breaking below key trendlines.

The US Dollars role as the world reserve currency came under scrutiny in 2019. This combined with extremely experimentative monetary policy and crashing markets makes the decline being observed in the DXY unsurprising.

Despite the declines, a strong rebound in the USD would also be unsurprising, especially in the case of an economic crisis. The position of the USD as the world reserve currency means that if domestic currency markets are appearing weak, investors will tend to transition capital into USD.

In a far more shaky position than the USD are Asian forex pairs. The Asian Dollar Currency Index, an index provided by Bloomberg which weights the value of several Asian domestic currencies against the USD, has been sharply declining since the start of 2020.

Several Asian central banks lowering interest rates and piling debt in 2019 has weakened the strength of their domestic currency. The outbreak of the Coronavirus has served to exacerbate the situation with speculators selling off Asian currencies to convert into strong alternatives such as the USD, EUR, or GBP. The below chart highlights the offshore RMB losing value against the USD since mid-January. 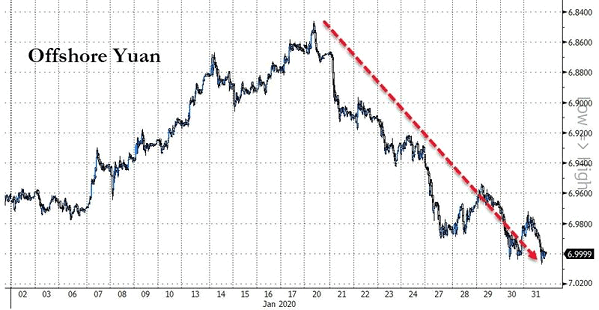 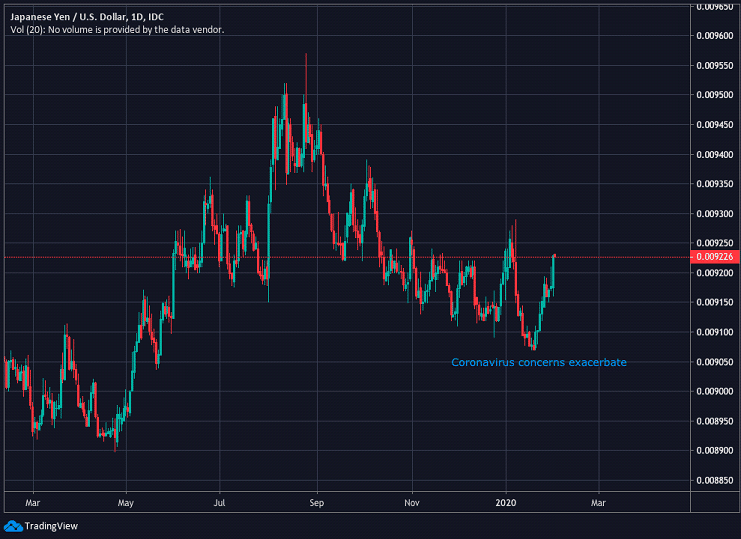 As prices in equity markets spiral downwards, JPY has outperformed the USD. The recent appreciation of the Japanese Yen coincided closely with news developments which revealed that the Coronavirus concerns were worse than initially expected.

Similarly, the Swiss Franc (CHF) has been outperforming in recent trading. The CHF/USD forex pair has appreciated over 3% since the start of December, a time when concerns regarding global economic health started to intensify. 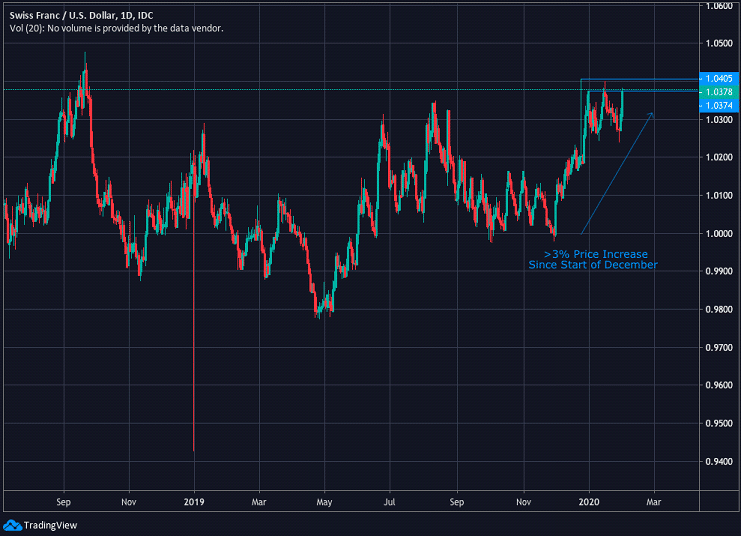 The Swiss Franc looks poised for an explosive move to the upside, testing resistance at 1.0374. With CHF/USD price responding strongly to exacerbating Coronavirus developments, the forex pair looks likely to continue its increase if economic concerns continue to rise.

Bitcoin as a Speculative Position

Bitcoin is becoming an increasingly serious contender for inflows of capital in the global markets, especially in times of high uncertainty. While Bitcoin has been widely considered a high-risk asset for its first decade of existence, Bitcoin has recently demonstrated high levels of correlation with gold when negative news developments occur. 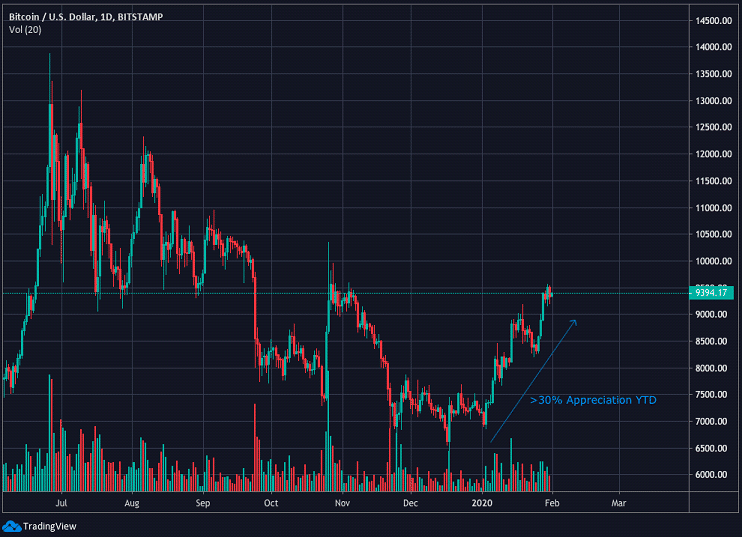 Bitcoin has increased over 30% year-to-date (YTD) and highly regarded global macro traders are starting to take notice. Raoul Pal recently tweeted that “if he could hold one asset for the next 10 years, it would be bitcoin”.

The predetermined inflation schedule, high energy investment, and distributed architecture of Bitcoin make it extremely well-designed to appreciate in times of economic distress. While global markets become increasingly prone to downside price movements, Bitcoin continues to become increasingly scarce with high levels of energy being invested to capture its diminishing release of new coins. Such energy serves to secure the Bitcoin network while a distributed set of nodes prevents any malicious actors from manipulating the ledger.

Laying outside of the traditional forex market, Bitcoin can be considered a more risky position to take. Bitcoin has been extremely volatile in its price history and many consider it too risky of an asset to trade.

Doom and gloom have thus far been the dominant theme for global markets in 2020. Although this may make it difficult to trade in equity markets, several opportunities spring up in forex markets.

Our analysis leads us to consider safe haven currencies as strong forex pairs to monitor for movements to the upside. For opportunities to short, we will be closely observing the domestic currencies of Asian countries.

Choosabroker has previously reviewed the best forex brokers for trading in this market. Choosing an online broker on this list provides traders with the widest range of forex pairs and trading tools.

If economic conditions continue to spiral out of control, an abundance of trading opportunities will be available in the forex markets. Make sure to regularly check back with the Choosabroker blog to read our market update analyses. If based in Australia, we’ve just released our Best Australian Forex list.