Major equity indices worldwide have been tumbling as Covid-19 brought the world to a standstill. Borders were shut, businesses were forced to close, and consumers quarantined. On top of all this, data shows a high percentage of businesses and consumers were swimming in debt with barely enough income before the crash to meet monthly expenses. Given that spending has halted in many cases, income will have dried up and both businesses and consumers can be expected to struggle to meet debt obligations. 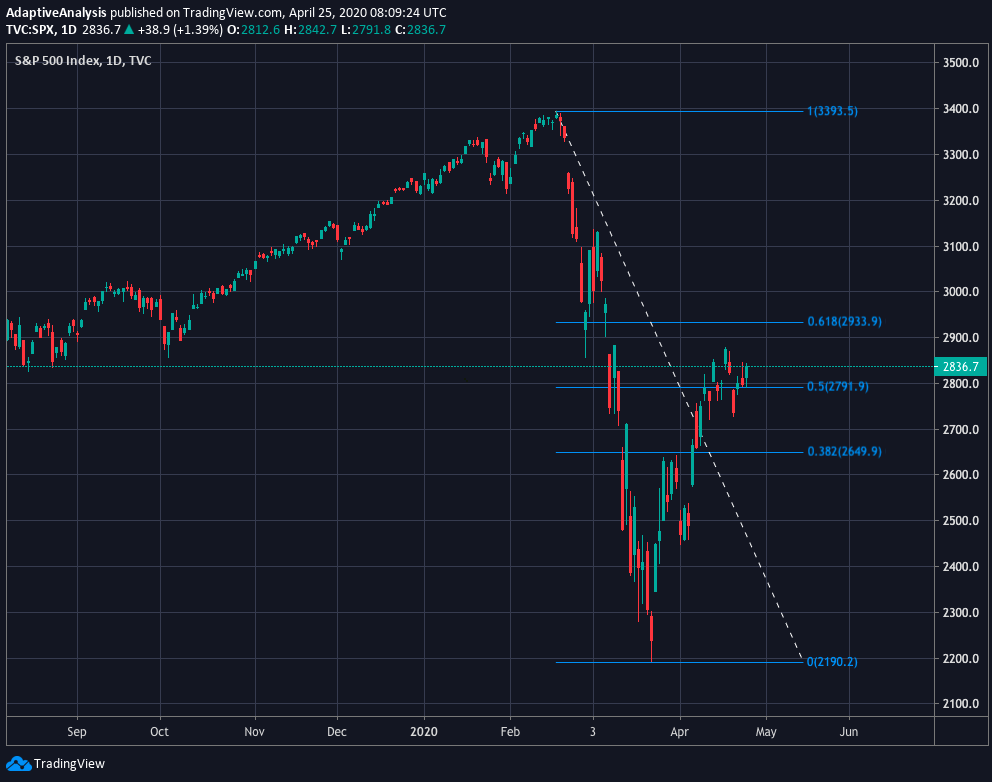 The S&P500 (SPY) has been pricing in potential disruption as early as January 23rd when Covid-19 cases exacerbated in China. However, the initial fall in the SPY was followed by a rally to record highs. It was not until almost one month later that the market began pricing in serious risk as Covid-19 cases rapidly spread overseas. A month of sharp declines resulted in the SPY recording a local low of 2,190.

The S&P500 has since retraced roughly half of its decline. Relief in equity prices has arrived amid extraordinary stimulus measures from the leading central banks. The combined assets of the Federal Reserve, ECB, BoJ, and PBOC have ballooned to over $20 trillion. The Federal Reserve has added over $1.5 trillion to their balance sheet in roughly four weeks.

Can Equity Markets Continue to Recover?

The pressing question is whether the equity market can continue its recovery and march on to all-time highs? Or was the recent crash just the initial onslaught with further waves of price declines in store? It is worth noting that it is not unusual for equity prices to rally in a bear market in response to actions from governments and central banks.

“During the Great Depression there were six big rallies in the stock market (of between 16 percent and 48 percent) in a bear market that declined a total of 89 percent. All of those rallies were triggered by government actions…” Principles for Navigating Big Debt Crises, Ray Dalio

When SPY performance is adjusted for increases in money supply, a convincing argument can be made that more downside price movement is in store. As illustrated below, in real terms, the current equities decline only dropped roughly half as much as the 2008 decline. The 2008 crisis was an unwinding of an over leveraged real estate market. The current crisis is unwinding an over leveraged global economy.

Other leading equity indices are not faring any better. Here’s the year-to-date percentage return of leading US indices. The Nasdaq 100 has managed to suffer only minor declines on aggregate due to the strong outperformance of some technology stocks. 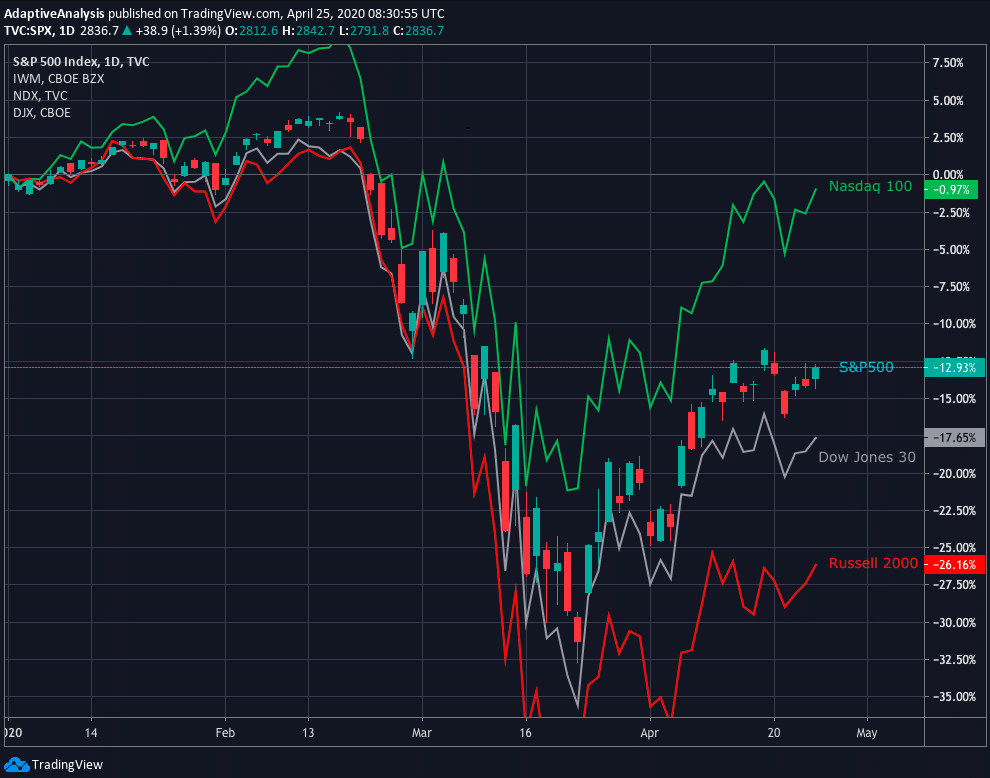 The economic data paints an extremely bearish outlook for equities. Initial claims in the United States recorded an astronomical increase on March 21st. 3.3 million of the American public filed for initial claims on the 21st of March and the following weeks were followed with over 18 million more filing. To put this into perspective, the 18 months following the Great Recession of 2008 had roughly 37 million Americans filing for unemployment benefits. Within just four weeks, this crisis has caused more than half this amount to file. A recent report has highlighted that 52% of American under 45 have either lost their job, had hours reduced, or have been furloughed.

From the business perspective, both past and forward-looking indicators feed into a bearish outlook. Retail sales excluding autos recorded their worst month on record.

Furthermore, businesses may be set for an even greater squeeze. A study by the Bank of International Settlements in 2018 found that 16% of listed US firms have only been able to survive due to low interest rate environments and access to cheap credit. The crisis will have put huge strains on these companies. Credit conditions are also changing. Moodys recently announced that they are placing roughly 20% of their collateralized loan obligation (CLO) securities under review. These securities are comprised of debt obligations in US firm loan agreements. Roughly 40% of the securities under review are one grade above “junk” status. If these securities are downgraded to junk, many who currently hold the instruments will be forced to sell in the market and many banks will be forced to keep these risky instruments on their balance sheet. The junk bond market will likely freeze up as all these instruments are dumped on the market with no buyers. Given the added risk on their balance sheets, banks will also be less likely to issue loans.

“Most of that [corporate] debt is BBB & will be downgraded to junk. That leaves forced selling of credit and no buyers. The junk bond market is going to freeze entirely.” Raoul Pal

Stocks That Have Outperformed

In summary, the macroeconomic outlook appears weak both from the consumer side and from the business perspective. Consumers have been forced to stay indoors and their confidence has been shattered with many losing their income while also having huge expenses and debt obligations. Businesses are in a similar position and are dependent on consumers to generate their income to meet obligations. Furthermore, businesses may observe a drastic change in credit conditions as Moodys reviews debt instruments for downgrade.

Our analysis leads us to believe that equities are destined for further declines. The stimulus may have served some brief relief but we believe that the economic data is simply too poor to sustain appreciation in the prices of equities.

If anticipating equity price declines, an approach to capitalize on such drops is shorting CFDs. Shorting CFDs such as the SPY will give traders downside exposure to US-listed equities. For added risk, shorting a CFD such as the Russell 2000 ETF IWM will allow traders to short small-cap US stocks. Small-cap stocks tend to under perform in downward trending markets but also add further risk as price movements can be more volatile than large-cap stocks.

It is also possible to take short positions in the equity markets of other countries with CFD products. Different brokers will provide access to different trading instruments. To review the best brokers for CFDs, check out our review here.

The purpose of our news section is to provide a general market overview and discuss possible market opportunities. There is no such thing as a no-risk opportunity. While you may choose to act upon the information provided, at no time will Choosabroker.com make specific recommendations for any specific person, and at no time may a reader or viewer be justified in inferring that any such advice is intended and in no way will Choosabroker.com ever assume liability for any losses resulting from your decision. Investing carries risk of losses. Information provided by Choosabroker.com is expressed in good faith, but it is not guaranteed. Please realize that investing in the markets demands recognition of the fact that error and uncertainty are part of any effort to assess future probabilities. Ask your broker or your advisor to explain all risks to you before making any trading and investing decisions. Further, we Choosabroker have a commonly used terms section for further reference.