With the vast majority of debt circulating around the global economy denominated in USD, the dollar has been strong as the COVID-19 crisis exacerbates. Emerging markets are particularly put under pressure as their domestic currencies decline against the USD.

The forex markets have had an onslaught of fresh information to price in over recent months. The biggest central banks have turned to quantitative easing to alleviate the impact of the global COVID-19 lockdown.

High levels of debt circulating around the economy has been a key theme in how the forex market has adjusted. With this debt dominantly denominated in dollars, emerging economies with their domestic currencies have been put under severe pressure during the dollar appreciations.

In this analysis, we review the run-up in the dollar as equities indices were sharply sold off. We also break down why emerging market economies will struggle as the vast majority of debt is denominated in USD. 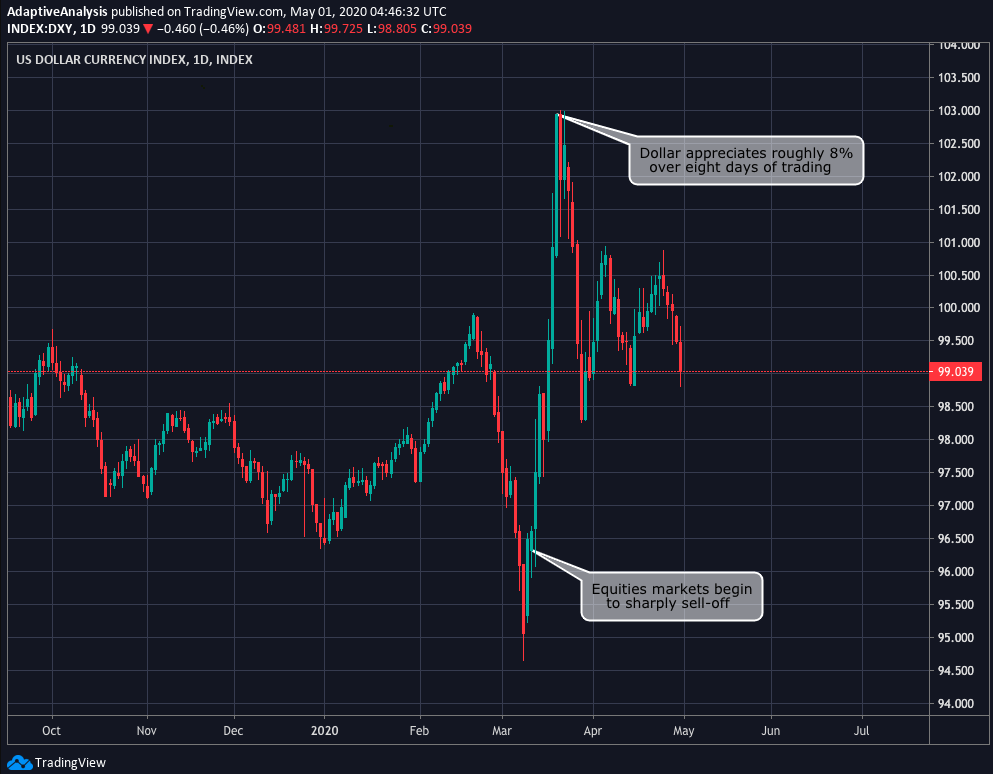 The sharp sell-off in equities markets which kicked off on March 11th demonstrated the strong position of the US dollar in the forex market. As market participants scrambled for liquidity, the dollar appreciated against other major currencies as illustrated by the Dollar Index (DXY) above.

Some currencies which comprise the Dollar Index have since appreciated in relation to the Dollar bringing the value of the index down. Widely considered safe haven currencies including the Japanese Yen (JPY) and Swiss Franc (CHF) have appreciated 3.5% and 2.4% respectively since the DXY high on March 19th. 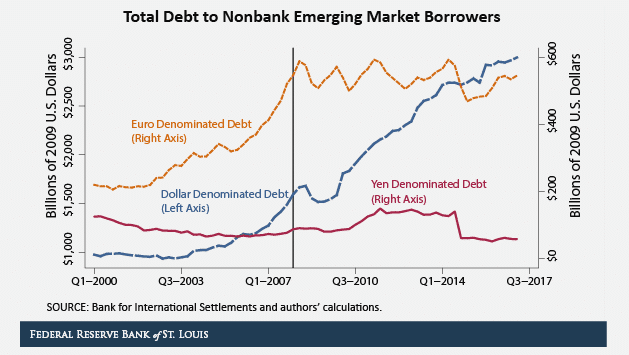 Emerging market borrowers have roughly five times as much debt circulating in dollars compared to debt circulating in euros. The US firmly holds the position of having the world reserve currency. This has granted the US significant room to run huge deficits and vastly expand its monetary base.

But the strength of the dollar and the large amount of debt denominated in it has put severe pressure on emerging market borrowers. The demand from these borrowers further fuels strength in the dollar. As the dollar appreciates, the debt of foreign borrowers grows larger in relation to their domestic currency, further increasing demand for dollars and spurring a vicious dollar demand cycle. Raoul Pal describes why this is extremely bullish for USD.

“The $13tn short dollar positions (foreign dollar debt held mainly by foreign corporation and investment vehicles) is the largest position ever taken in the history of global financial markets. It can only mean a massive, uncontrolled dollar rally.” 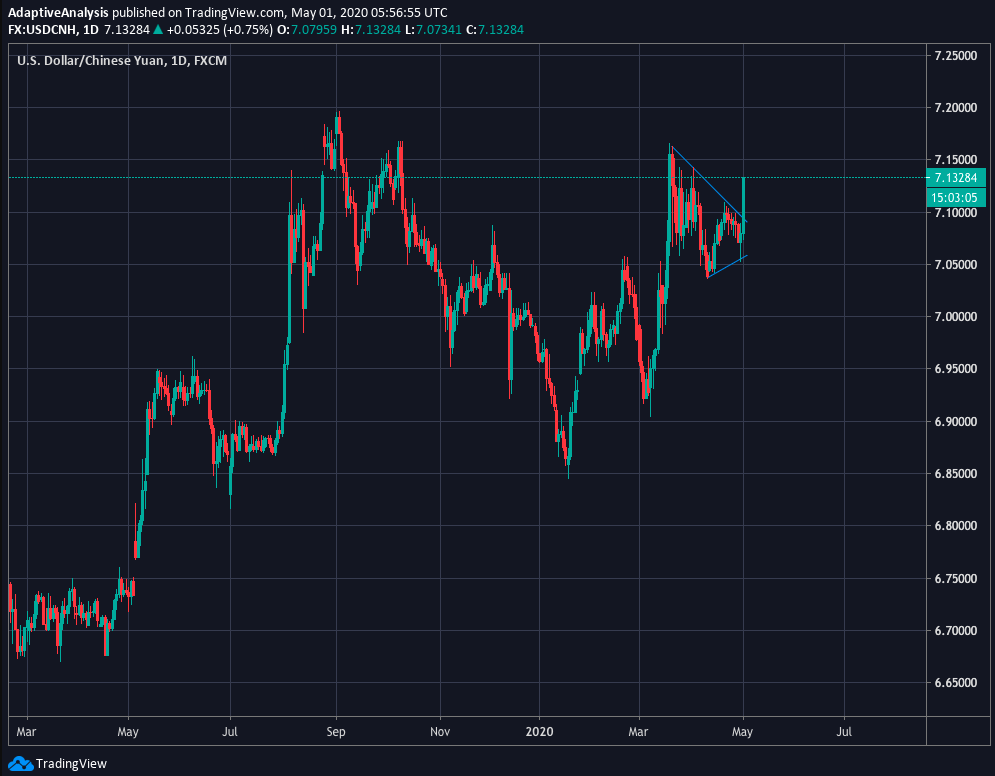 The battle between China and the US for economic dominance has consistently grabbed headlines over the past decade. Despite the large GDP of China, the Chinese domestic currency is a far cry from challenging the USD as the world reserve currency.

The Chinese Renminbi holds a small share of official foreign exchange reserves held by central banks. The dominance of the dollar over the Chinese Yuan is evident in its recent performance against the Offshore Yuan (CNH). 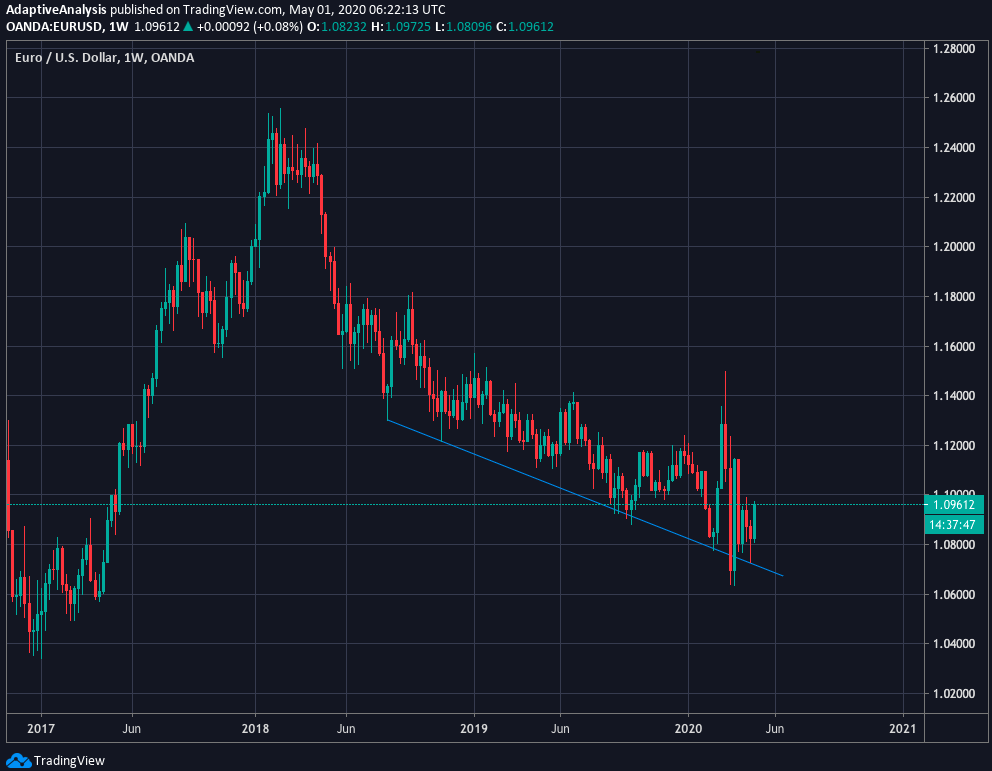 Currencies which represent a larger share of official foreign exchange reserves have not been faring much better. The Euro has been trading in a downtrend against the USD since forming highs at the start of 2018.

How long it can maintain its gradual depreciation against USD is questionable given that a supporting trendline is being put to the test. EUR/USD price fell below the supporting trend line as equities sold-off in mid-March but returned above the following week.

Given its weak performance over recent years and the current crisis fueling a stronger dollar, a retest looks likely. A return below the supporting trendline may be accompanied by a sharp sell-off below.

Weaker emerging market currencies have been getting decimated. Here’s the Brazilian Real (BRL) with a 26% year-to-date depreciation. 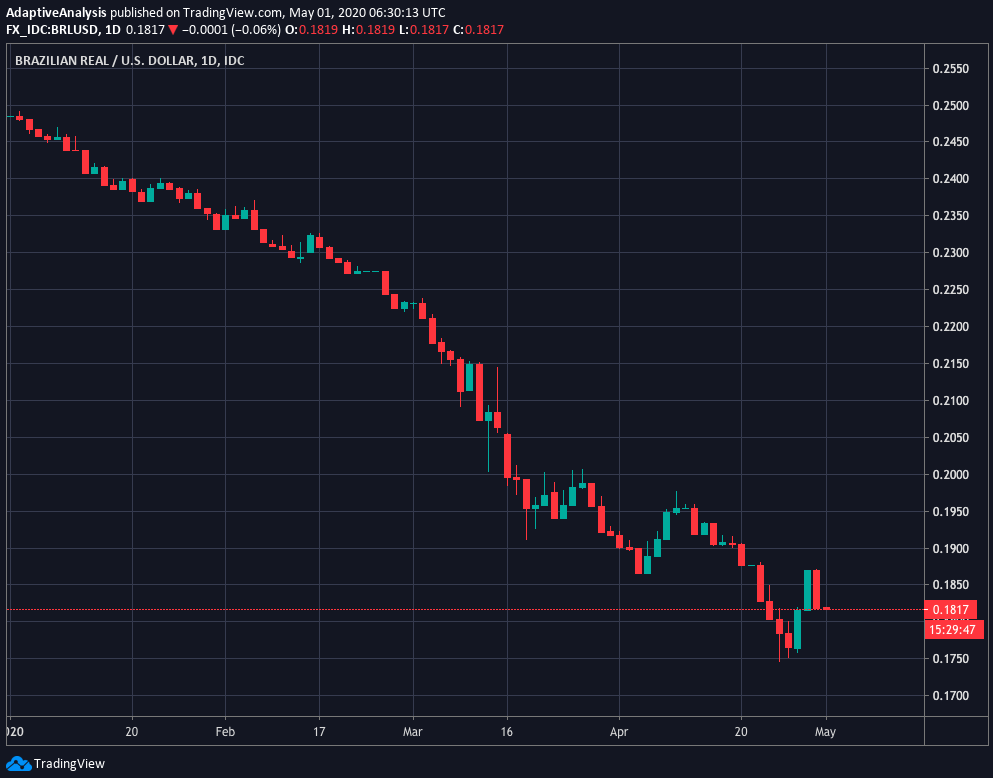 The Brazilian Real has been losing value against the USD for several years but its depreciation accelerated as equities sold off in March. The equities sell-off in March was followed by massive stimulus measures being taken by the Federal Reserve. While the stimulus serves to help the US economy, other nations are put in a precarious position as they cannot excessively expand their money supply without risking hyperinflation. Hence, the dollar strengthens and weaker economies are put under severe pressure as their domestic currency devalues. 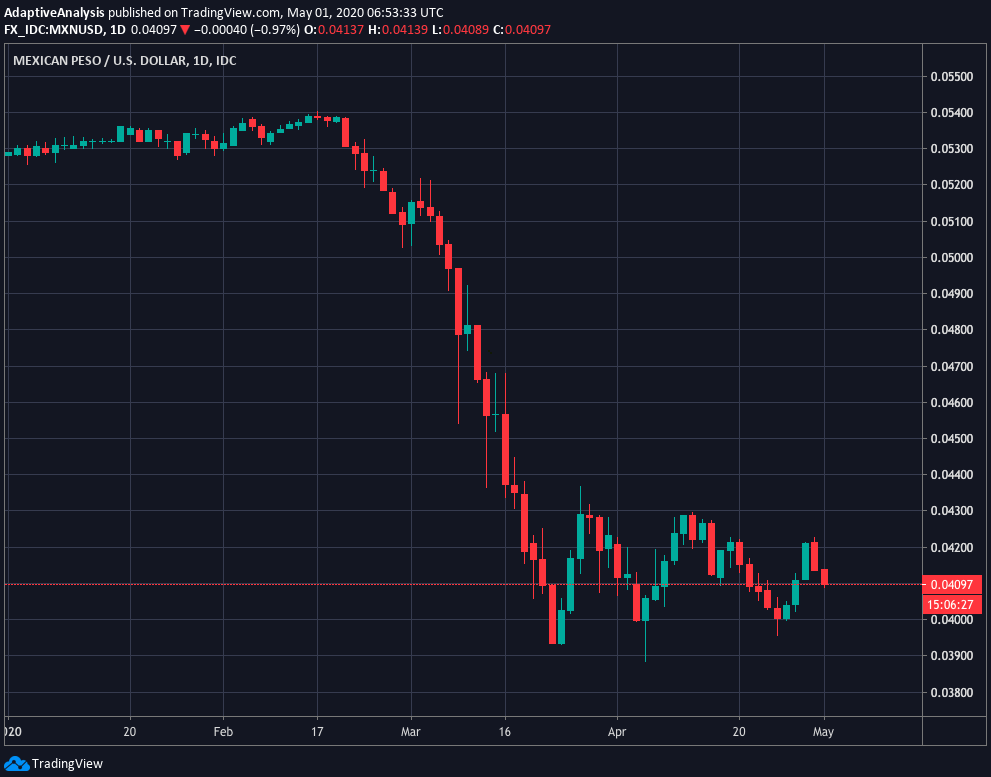 Mexican Peso went into freefall against the USD in March. The Argentine currency is an example of a domestic currency which has been struggling with hyperinflation for several years. Its value has been eroding against the USD over the recent years. Its descent has continued this year with no sign of stopping. 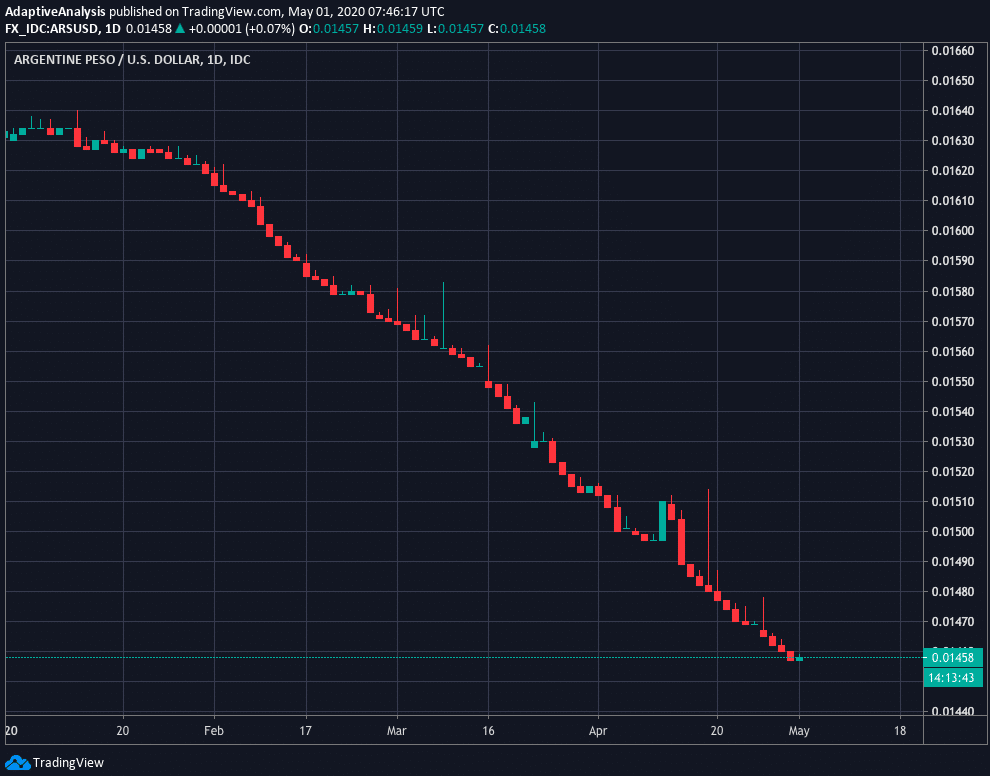 Several online brokerages offer trading products to speculate in the forex market. Indexes which track the USD against a basket of currencies are widely available with such brokers.

Using financial instruments such as CFDs also allows traders to take short positions. As the forex market is responding to the current crisis, the dollar seems poised for a strong performance while the domestic currencies of emerging economies will likely continue to struggle.

We previously reviewed the best forex brokers to consider for speculating in the foreign exchange market. If you’re looking to capitalize on the forex movements which take place as this crisis develops, these brokers are worthy considerations.  There are many leading interactive forex brokers to review on this site. Many of these can assit is you are looking for day trading stocks or Forex and specealise in different levels and experience from advance to brokers for beginners.

The purpose of our news section is to provide a general market overview and discuss possible market opportunities. There is no such thing as a no-risk opportunity. While you may choose to act upon the information provided, at no time will Choosabroker.com make specific recommendations for any specific person, and at no time may a reader or viewer be justified in inferring that any such advice is intended and in no way will Choosabroker.com ever assume liability for any losses resulting from your decision. Investing carries risk of losses. Information provided by Choosabroker.com is expressed in good faith, but it is not guaranteed. Please realize that investing in the markets demands recognition of the fact that error and uncertainty are part of any effort to assess future probabilities. Ask your broker or your advisor to explain all risks to you before making any trading and investing decisions.