We analyse the drivers behind the March sell-off  to uncover Bitcoin performance and make a case that BTC could outperform in the long-run as monetary expansion and large fiscal deficits increase the risk of inflation in economies outside the US.

Bitcoin advocates have long been anticipating that the world’s first digital currency would outperform during the first global economic crisis of its existence. However, the initial performance of BTC as COVID-19 spreads has not been promising.

Bitcoin lost over half its value within two days in March. While it has since partially recovered, the first signs of how Bitcoin will behave in times of an economic crisis would suggest that investors will sell the asset for liquidity. But despite the initial sell-off, a strong case can be made that Bitcoin is setting up for success in the long-term.

Breaking Down the March 2020 Bitcoin Decline

The revived supply metric shows how much BTC has been transacted that hasn’t moved within certain timeframes. The analysis showed that 283k Bitcoin was transacted on the 11th of March which had not been moved for at least 30 days. However, only 4,131 Bitcoin which had not been moved in at least one year was transacted. This indicates that shorter-term holders of Bitcoin were moving their BTC to exchanges to sell on the day preceding the sharp decline. In the aftermath of the sell-off, many questioned the idea of Bitcoin being a digital gold. Bitcoin being a digital store of value comparable to gold has been one of the strongest narratives surrounding the asset in recent years. With high expectations that Bitcoin would outperform in times of economic turbulence, many believed the value proposition of Bitcoin was undermined in light of the sell-off.

Many investors still acquire Bitcoin with the viewpoint that it is a high-risk speculative asset. With many holders of Bitcoin seeing the asset in this light, it is logical that these holders would sell for liquidity when panic ensues in the markets.

These fundamental factors are what initially led many to see Bitcoin as a digital equivalent to gold. Despite price declines, these factors have remained unchanged. Bitcoin still maintains its fixed supply schedule and has computing power worldwide securing the ledger. These fundamentals play into the bullish long-term outlook which many hold for Bitcoin. However, in the short-term, price prospects are uncertain as Bitcoin price approaches some key resistance levels. Bitcoin price has traded in an uptrend since the sharp sell-off in March. However, an upcoming event casts uncertainty over how Bitcoin price will perform in the near-term.

The Bitcoin block subsidy halves roughly every four years and its third halving is scheduled to take place in ten days. The halving will put significant pressure on miners who generate the vast majority of their revenue from the block subsidy.

In the short-term, the price prospects for Bitcoin are vastly uncertain. However, in the longer-term horizon, many of the actions being taken by central banks and governments are likely to increase the attractiveness of BTC.

The following macroeconomic developments have been building a stronger case for Bitcoin outperforming over the long-term horizon: 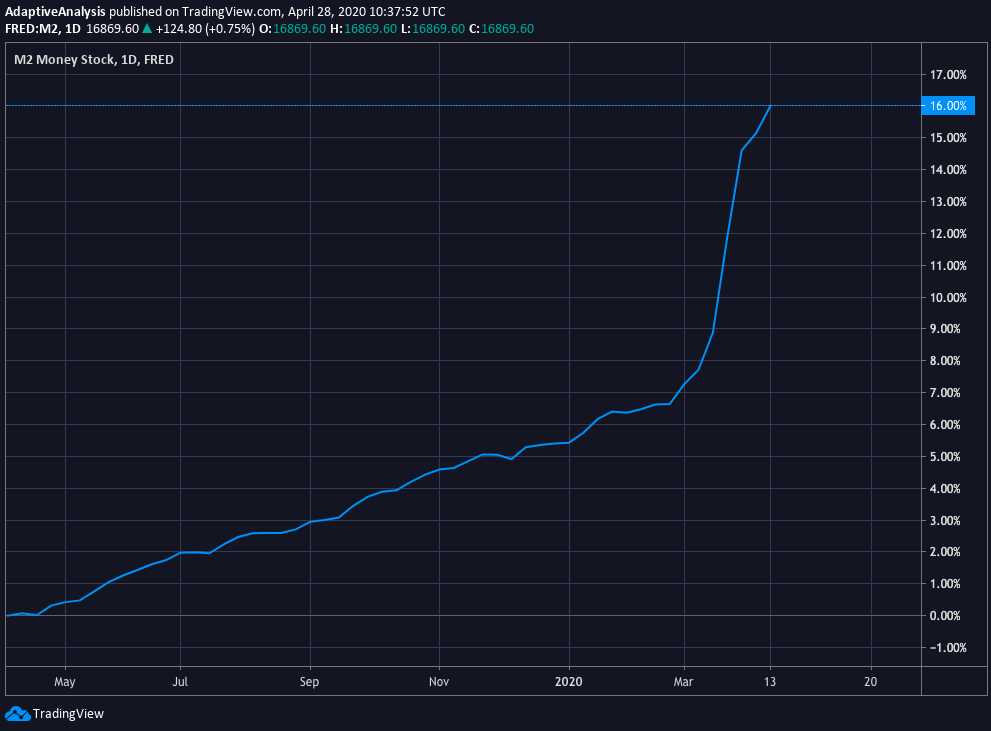 In circumstances such as these, Bitcoin performance will become a more attractive option given its predetermined inflation schedule. Venezuela has suffered extreme hyperinflation in recent years. The cafe con leche index tracks the price increases for a cup of coffee sold with milk in the capital of Venezuela. The index shows inflation of 1,200% over the past year alone.

Many Venezuelan citizens have turned to Bitcoin as an alternative to their domestic currency. With central banks globally bumping their balance sheets up to extraordinary sizes, we may see more cases like Venezuela spawning over the coming decade.

Governments are also being forced to run deficits to keep their domestic economies afloat. Given that the USD is the world reserve currency of the world, the US has been able to maintain large deficits and print large amounts of money while keeping the risk of inflation low. However, other economies run a higher risk of inflation.

Google trend results for the search query “Invest in Bitcoin” highlight that interest in holding BTC as an investment has reached its highest level since June 2019. Bitcoin has certainly been touted as an investment which can serve as a hedge against economic turmoil. As we move beyond the initial price onslaught, the fragilities of the global economy have begun to pique interest in Bitcoin.

Several online brokerages offer trading products and CFDs which allow traders to gain upside exposure to Bitcoin. There are also financial products available to take short positions in Bitcoin and speculate on another sharp drop in price. We have previously reviewed the best cryptocurrency brokers. For more risk, altcoin products can also be considered which have less liquid markets and are more susceptible to volatile price movements.

The purpose of our news section is to provide a general market overview and discuss possible market opportunities. There is no such thing as a no-risk opportunity. While you may choose to act upon the information provided, at no time will Choosabroker.com make specific recommendations for any specific person, and at no time may a reader or viewer be justified in inferring that any such advice is intended and in no way will Choosabroker.com ever assume liability for any losses resulting from your decision. Investing carries risk of losses. Information provided by Choosabroker.com is expressed in good faith, but it is not guaranteed. Please realize that investing in the markets demands recognition of the fact that error and uncertainty are part of any effort to assess future probabilities. Ask your broker or your advisor to explain all risks to you before making any trading and investing decisions. If you’d like to trade Bitcoin, check the Best Crypto currency broker section.